Let Us Welcome the Text Home 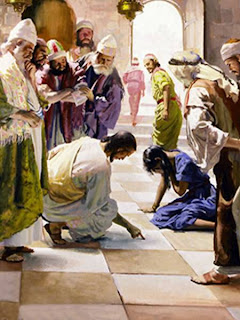 In the July/August Biblical Archaeological Review, Ben Witherington III comments in his article A Text Without A Home, “If text determines cannon, by which I mean the original inspired text of the gospel is what should be in the canon, then John 7:53-8:11 ought not to be in our Bibles”[1]. He goes on to quote some manuscript evidence as his reason for excluding the passage. He cites p66, p75, Aleph [Codex Sinaiticus], B [Codex Vaticanus] and a host of others (he doesn’t actually show the host, he just writes a host of others). He further recognizes that the passage “surely is one of the “many other things Jesus did” referred to in John 21:25.” The good professor’s final conclusion is that the text relates a true event but has no home in the Bible. He further states that he will not preach from the text, but will use the text to illustrate points from other passages.
I agree that the text does indeed relate a true event. I also agree that text does determine cannon. I don’t agree that the text does not have a home in the Bible. A second look at just the manuscript evidence will show that this passage is as old and widely attested as any variant reading we have. There is more to textual criticism than counting manuscripts and recording their age. There are many things to consider when determining whether a variant is original or not. I will not give an exhaustive explanation here but simply highlight a few important aspects of the extant evidence. First, we must distinguish between the age of the manuscript and the age of the reading. Manuscripts are copies of other manuscripts; therefore they preserve a reading older than the actual manuscript. Second, we will consider which variant is represented by the most text types. This tells us how widely accepted the passage was and discounts the influence of a single school of thought over the transmission of a variant. Finally, we must ask ourselves what is often considered the watershed question of textual criticism, “Which variant most likely gave rise to the others?”[2]
So, how old is the reading? Professor Witherington already established that some very good ancient Greek manuscripts exclude the passage. P66, p75, Aleph and B are all third to fourth century manuscripts thought to preserve a second century reading. The inclusion of John 7:53-8:11 does not have any such ancient Greek manuscript evidence. However, the passage is well attested in several Old Latin manuscripts. Often versional evidence is of little value because of grammar differences between languages. But with larger passages it demonstrates, without a doubt, that the text existed very early. Old Latin translations existed in North Africa as early as 180 AD, in Rome as early as 250 and are thought to preserve at least a second century reading[3]. So by considering the Old Latin, papyri and Uncial evidence we can conclude that as early as the second century the text was included in some manuscripts and excluded from others. The point here is that the evidence for inclusion is as old as the evidence for exclusion.
Next we consider which variant is represented by the most text types.

Because of the enormous volume of Greek manuscripts, ancient versions and Patristic citations of the New Testament available, the gathering of information on a particular variant can be overwhelming. To alleviate this problem, manuscripts can be grouped into broad text types that share similar characteristics.[4] The major witnesses for the exclusion of the passage almost all come from a single text type – the Alexandrian. This fact considerably weakens the evidence since the Alexandrian school could have excluded the passage very early and passed down that tradition. In contrast, the manuscript evidence for the inclusion of the passage includes texts from the Alexandrian, Western and Byzantine text types. Attestation from various text types considerably reduces the possibility of the influence of one school of thought or scholarship over the transmission of the text.
Finally, which variant most likely gave rise to the others? If we exclude the passage, the text flows nicely from John 7:52 to 8:12. It seems highly unlikely that a scribe would include a passage that breaks up such a nice flow of text. On the other hand, the pericope seems to indicate that Jesus may have been too forgiving of some serious sin. It is not hard to imagine that a scribe or school of scribes might choose to exclude the passage to “improve” the text and avoid a difficult passage to explain. This was not uncommon, especially in the Alexandrian school, before the cannon was officially established and recognized.
Based on this brief review of the external evidence, we can make several conclusions. First, the passage was part of the Gospel of John as early as any other variant in John. Second, the manuscripts that exclude the passage are very early but come almost exclusively from the Alexandrian Text type, which comes from the Alexandrian school in North Africa. Third, the inclusion is found very early not only in North Africa but also in Rome and Antioch. Finally, it seems more likely that a scribe would edit the passage out of John rather than include it in such an awkward place. Based on just these four conclusions, I see no reason why we cannot welcome the pericope of the adulterous woman home to John 7:53-8:11 with open arms.In his article, Professor Witherington says that he considers the text to be authentic but, because it was not part of the original Gospel of John, he would not preach from the passage by itself. I hope this brief analysis will put the good professor’s mind at rest and allow him and others who seek to rightly handle the word of truth to preach, at will and with confidence, from our formally homeless passage.
____________________________________________
[1] BAR Vol 34 No. 4 p. 28
[2] Cf. D.A. Black, New Testament Textual Criticism, p. 35ff. Metzger, The Text of the New Testament, Its Transmission, Corruption, and Restoration 3rd, Enlarged edition., (Oxford University Press, 1992). p.207ff for methodological considerations.
[3] Cf. Bruce M. Metzger, The Early Versions of the New Testament, Their Origin, Transmission, and Limitations. (Oxford, Flarendon Press, 1977), pp.285-303. Also see Arthur Voobus, Early Versions of the New Testament, Manuscript Studies. (Stockholm, 1954), pp. 33-121
[4] Michael W. Holmes, Textual Criticism, from New Testament criticism & Interpretation, edited by D.A. Black & D.S. Dockery, (Grand Rapids, Michigan, Zondervan Publishing House, 1991), p. 106
Posted by The Mosse' Family at 11:31 AM No comments:

Why People live in Southern California

When we were preparing to leave Odessa for home service I told my friend Igor, “Why don’t you save some money and come visit us! You will only have to pay for your flight. You can stay with us and we will show you around.” He smiled, shook his h 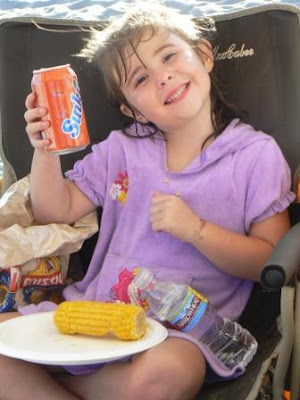 ead and said, “No thanks, I’ll wait until you return. California is too dangerous. You have earthquakes, fires, floods and high crime.” “Don’t forget the mud slides.” I added and he chuckled. So, “Why do people live in Southern California?” I ask Igor, “I don’t know” he answered in English. I told him why and now I am enjoying experiencing why. It is the weather and only the weather.

Only in Southern California can I work through a 90+ degree day only to enjoy the cool 70 degree breeze in the evening as I sit reading on our porch. I sat on our porch with Julie the other night. It was quite, cool and calm. We were both reading and enjoying the weather. I suddenly realized something. I looked and Julie and said, “If we were in Odessa, we would be the dinner course of 10,000 mosquitoes. There was no buzzing sound to be heard on our porch – only in Southern California.

Last Saturday, my son, father-in-law and I went to the beach early in the morning to save a fire pit so we could have a sixth birthday party for Anya. I swam in the “Quite” Ocean (as it is called in Russian), relaxed on the beach, enjoyed cooking meat over an open fire in the cool of the day, played, roasted marshmallows and enjoyed fellowship in the evening around the fire pit. We did all this with the sound of crashing waves in the background. Throughout the day, as I enjoyed myself, several times I remembered why people live in Southern California. Need I say more?

Here is our little girl enjoying some beach time on her birthday – Happy sixth Aneechka!
Posted by The Mosse' Family at 4:18 PM No comments: