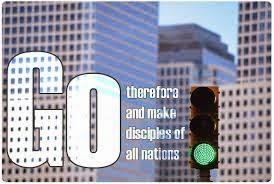 After my last blog about the Great Commission in Matthew 28:18-20, a friend of mine read it (thank you very much for being one of three) and sent me a comment. He said that I failed to interact with Wallace’s argument that the participle should be translated “Go”. Oops, I thought, I did miss that. I didn’t realize that Wallace did have an argument in his grammar specifically stating that Matthew 28:19 should be translated “Go”. So, with a bit of wounded pride, embarrassment and some fear and trepidation, I read Wallace’s argument. Actually, I was excited to hear a good argument for the “Go” translation. Happily, I found one in Wallace that both affirmed my thinking and gives reasons for a “Go” translation. He calls this an “Attendant Circumstance” participle. I didn’t know what that meant either. Wallace defines it as a participle used “…to communicate an action that, in some sense, is coordinated with the finite verb. In this respect it is not dependent, for it is translated like a verb. It is translated like a finite verb connected with the main verb by “and”.” He later adds, “If a participle makes good sense when treated as an adverbial participle, we should not seek to treat it as an attendant circumstance.”

Wallace is simply saying that the participle, πορευθεντες, can be translated as a verb, “Go”. I actually didn’t dispute that in my original post. I said that the translation “Go” is permissible but maybe not the most accurate expression of Matthew’s thought. I do think it can be translated as “Go” but my contention is that the verbal idea can be better expressed in English than using two imperatives.

Since attendant circumstance participles are rare, Wallace also offers five criteria to determine if a giving participle might fall into this category and Mathew 28:19 meets all five. They are as follows:
We are five for five, so Matthew 28:19 could be an attendant circumstance. That means that “…we must argue from sense rather than from translation.” and “… the relative semantic weight in such constructions is that a greater emphasis is placed on the action of the main verb than on the participle”.

Since Matthew chose to use a single imperative verb preceded by an aorist participle to convey Jesus command, the question is, "What is the sense of the command and how do we best express that in English? If we accept that this is an attendant circumstance, then according to Wallace, we agree to the following:
The sense is that we have a primary command with a very closely tied verbal idea from the participle. Can we combine those in such a way in English so that the command “Make disciples” is prominent and “Go” is closely tied but still secondary to the command? Do we have a structure in the target language (English) to communicate such an idea? I see two options.

We can use two commands “Go and make disciples”. While this is permissible, in English both verbs “go and make” have the same semantic weight. One could even argue, and many sermons bear this out, that the command “go” receives the greater semantic weight because it is the first command. This does not seem to completely line up with what Matthew wrote. As I argued in the previous post, Matthew could have used two imperatives. That would have been common, acceptable Greek. In that case, the sense would have been “Go and make disciples”. We essentially have a functional almost exact equivalent in English. However, this is not the case. By translating the attendant circumstance as two imperatives we are removing the nuance of the Greek construction. In other words, by reading the translation, we cannot determine if the original was two commands or a participle command.

If we translate the participle as an assumption, I think we better capture the sense of what Matthew wrote. By way of illustration, I imagine that I’m sitting at the dinner table with my family enjoying a meal. Near the end of the meal, it comes to my mind that someone should clear the table and do the dishes. I might say to one of the children. “After you clear the table, wash the dishes.” The command is “wash the dishes”, but there is an assumption that before washing the dishes, they will clear the table. It is almost stronger than a command because there is no real opportunity to refuse. I could have said, “Clear the table and wash the dishes.” The semantic content is essentially the same but when I use a single verb, “wash”, the participial phrase, “after you clear the table”, is an action coordinated with the main verb and the semantic weight falls on “wash”. This structure seems to be in line with what Matthew wrote. The verbal idea of going is coordinated with the main verb but the semantic weight falls on “make disciples”. This can be done in English by what many have called the “Great Assumption”. In Jesus’ command to make disciples, the idea of going is assumed. “Since you are going [anyway], make disciples” or “After you have gone [aorist participle], make disciples.” Again, there is no opportunity to refuse to go. It is simply assumed that you will go.

In summary, I have no problem with calling Matthew 28:19 an attendant circumstance. I also have no problem with translating the participle as “go”. I simple think that translating Matthew 28:19 as the Great Assumption closely coordinated with the Great Commission, keeps the emphasis on the main verbal command and lines up very well with the sense of what Matthew wrote.
Posted by The Mosse' Family at 10:56 PM 8 comments: