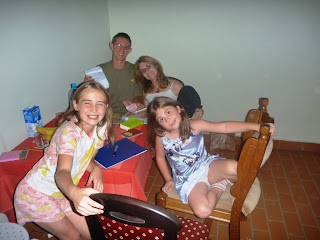 Anya the Joyful rolled down the cliffs of insanity in an old tire with Joseph the golden nostril during a bomb strike by unknown forces. They laughed so hard they fainted. They woke up at home and couldn’t laugh until the next day. The Dread Pirate Roberts saw it all along with his friend, Enigo Montoya.
Joseph the faithful became a Jedi Knight with Tiana during the 100th annual Croatian cheesecake cook-off. Hedge-hog tried to kill him , so he killed the hedge-hog. All this was witnessed and recorded by Ahmed Abassida, official scribe of the most excellent sultan of Abijarda, may he live forever, in the second year of his reign.
Anya the terrible laughed for no reason, nonstop with Jem and Andre the Giant during a snowstorm on the planes of Georgia. Jabba the Hut fed them to his monster (Luke was too late to save them). This was all witnessed by Mr. and Mrs. Mosse, who watched it wide-eyed.
Micah the unbreakable decided to start a career as a mercenary soldier with Queen Elizabeth the second of England. During a time of dire necessity and general inconceivable calamity the lizard was so hungry that he pulled off his own tail and ate it. Now one saw it and no one heard it.
Mama became a knight errant by playing dance-dance revolution, while watching the history channel on rainy nights with 14 sturdy hobbits. Because it was fun they became attractions in the circus freak show. You can see the toughing story of the twinkle toad history professor on history channel!
Scout the great banana-arm dirtily defeated the evil ruler of a neighboring kingdom’s champion in a one on one joust to the death. Because the champion was not thinking the moment he did this. This caused a wide spread constipation epidemic and a high demand for the proper apparatus. It was witnessed by Micah.Joseph, the happening historian about town, shattered 40 coconuts using only his left hand in a moving outhouse with a gang of ruffians so that he could train for Ukraine’s got talent and Wipeout. They went up on a plane and were made to parachute with nothing but an oversized sombrero and an umbrella. This was all witnessed and recorded by Mickey and Minnie Mouse.
Posted by The Mosse' Family at 6:09 AM No comments: