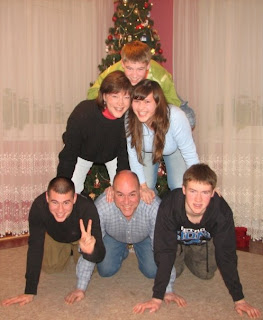 When we first moved to Kiev in June, 2003 one family that befriended us was the Burkett family. I remember the first time Joseph went to their apartment to play. After several hours he came back with all kinds of stories about what they did. He was very excited and was talking very fast. I noticed that he wasn’t using many names, so I stopped him and asked what the kid’s names were. He said, “Well, there is the oldest, the youngest, Andrew and the girl.” He had so much fun that he had forgotten to ask their names. We enjoyed their company so when they moved to Lutsk a year later, we rejoiced that God was opening a new work but were sad to see them go. Over the years, Herb, Kim, Josh, Andrew, Ashley and Jacob have had a vibrant ministry in Lutsk and have been a blessing and inspiration to us. They are models what a family can be. The love each other, they serve the Lord together and are kind to the people in their lives. In the picture Andrew is the young man on the bottom right with both hands on the floor. Next to him is his father Herb, then his brother Josh. The next row is his sister Ashley and mother Kim and on top is his little brother Jacob.

Andrew was sick with the flu. Last Monday, he seemed to be worse so they took him to the doctor who diagnosed him with double-pneumonia. They began treatment right away. Andrew’s condition worsened, they were moving him to another hospital when his heart stopped and they were not able to revive him. He died. Just like that. How is the human soul supposed to process such a thing?

In a book by Philip Yancey, I read that Gregory of Nissa once said that Basil th

e Great had ambidextrous Faith. He explained that his faith was ambidextrous because Basil welcomed pleasures with his right hand and afflictions with his left. Later, Yancey talks about John Donne (17th century poet and dean of St. Paul’s Cathedral in London). Donne lived and ministered during a time a great pain. The bubonic plague took tens of thousands and eventually Donne himself fell sick and suffered greatly. At first Donne’s devotions reveal a fearful struggle with God. He often asked God, “Why me?” Gradually, his question changed to “Will I trust God with my pain, anger and fear?” This is, of course, the correct and more difficult question. Donne realized that the source of the pain was not at issue, the response to the pain was at issue. That is ambidextrous faith.

As I ponder the lives of men like Basil, Donne and the Burketts and compare the many blessings in my life, I am ashamed at my decidedly “right handed faith”. I am ready to praise God and thank Him for any and all blessings. When pain, hardship – even minor ones, come, I am so quick to ask “Why me?” “Lord, why don’t You simply spare me the pain?” My heart runs to the wrong question. Why don’t I instinctively respond with the question, “Will I trust, will I bless?” It is because my faith is right handed. I desire and fear to develop ambidextrous faith. I fear it because there is only one way for it to grow - on the job training – practical experience. I desire it because I want to be like Jesus.
As I grieve with the Burkett family from afar, I am amazed at their ambidextrous faith. I pray that they will continue to trust God as they bare the weight of this tragedy with their left hand. May they have the strength to mourn, trust and bless.
Posted by The Mosse' Family at 12:17 PM No comments: