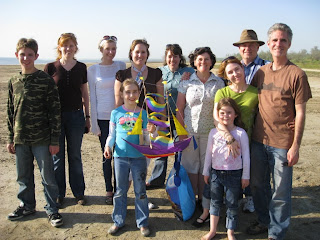 We have planned a busy summer. Currently nine teams, on set of long term guests (one month) and an intern are planning on joining us. Besides the visiting teams we have also planned other ministries and travel. So this is what our team looked like in May. Notice the smiles and optimism. Let us see who is standing at the end of August!

Below is a sketch of the summer schedule.

We have news already. Ron and Jeane have arrived fine. We enjoyed watching Joseph singing in the choir on Sunday night. Ron and Jeane were greeted at Grace Church by many old friends.
Today is Monday, May 31, 2010. The Community Bible team missed their plane in New York and will be arriving later than planned. They will fly into Kiev and take either a bus or train down to Odessa. We are still smiling, but this is just the beginning.
Posted by The Mosse' Family at 11:40 PM No comments: