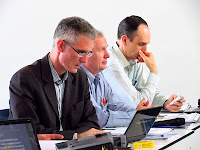 One of the strengths of the Bachelor of Theology program at Odessa Theological Seminary is that each student is required to write a final “Diploma Work” and defend it before a panel of faculty and peers.  The process is difficult and can be frightening.  I had the privilege this year of being the advisor to two students, Dima and Oleg.  This was a challenge to my Russian speaking ability; however we were able to communicate well in our weekly interactions.  Thankfully, they both read English well so, through the year, I was able to read their work in Russian and provide feedback in English.  About 10 days ago they both defended their work before their peers and a panel of faculty.  After working so hard together and seeing the great progress they both made over the year, it was difficult to resist the urge to defend them during the question and answer time.  However, in this case, resistance was not futile and they both produced a work to be proud of, gave excellent presentations and did an excellent job answering questions.  They needed not help from me defending their point of view.  Great job guys, I was a privilege working through these texts together.  You have earned a good rest.
﻿﻿
Below are excerpts of my comments from my recommendation of their work.
Dima Trei studied John 6.  He wanted to know specifically what Jesus meant by “Eating My flesh and drinking my blood.”  More specifically, is it connected with communion and if not, what does He mean.
﻿﻿﻿﻿
Comments:
﻿﻿﻿﻿﻿﻿﻿﻿﻿﻿﻿﻿﻿﻿﻿﻿
﻿﻿﻿﻿﻿﻿
After the analysis Dima presents his arguments in three parts.  First he presents the position that the passage is a reference to the Eucharist.  He gives a summary of the position then uses the position of orthodox theologian Георгий Чистяков as a test case.  Dima presents three arguments from Чистяков for the position that Jesus is making a reference to the Eucharist.  In the next section, Dima counters each argument and then presents at least four more of his own that explain why he rejects the connection with the Eucharist.  This is one of the strongest sections of the paper.  Dima makes good use of his historical and lexical analysis to build solid arguments that come from the text itself.  He makes an especially good argument against the nuanced use of the words εσθιω and τρωγω.  He shows how John clearly used them as synonyms in John 13:18.  This verse is a quote from the LXX text of Psalm 40:10.  In LXX the word εσθιω is used.  However, when John quotes it he uses the word τρωγω in the place of εσθιω.  This is a very strong argument that John did not use the words according to their nuanced meaning but as synonyms.
﻿﻿
﻿
...After rejecting the Eucharist position, Dima present his own point of view in his Theological Interaction.  Here he combines what he has learned from especially his historical, lexical, rhetorical analysis to come to the conclusion that to eat the body of Jesus and to drink the blood of Jesus is to believe in Him for spiritual life in the same way you believe in real bread for physical life.  He uses the inlcusio to divide the passage into three parts.  The first is the exchange between Jesus and the Jews.  In this section, terms are being defined.  The Jews are talking on an economical level and Jesus on a spiritual.  Next is the first inclusio (6:35-48).  Dima calls this the key to understanding the third metaphorical section.  In summary, in this section Jesus connects the idea of coming to Him in belief with hunger and thirst.  There are more nuances, but Dima uses Jesus’ own words to explain the more difficult third section.  The third section is the next inclusio (6:49-59).  This is where Jesus explains similar ides using metaphorical language.  Dima connects the three sections to arrive at his conclusions and adds more nuances about being one with Jesus and reasons why He used such shocking language.
﻿﻿
Oleg Yakavenko
﻿﻿
﻿
Oleg studied Paul’s view of the atonement.  He presented a range of ways Paul explained and expressed Jesus’ work on the cross and then focused specifically on the term ιλαστεριον (hilasterion) in Romans 3:25.
﻿


…Next Oleg presents a solid grammatical analysis.  This is the strongest section in the work.  Oleg deals especially well with the problematic phrase δια πιστεως Ιησου Χριστου.  He gives a clear presentation of the grammatical nuances and how they influence the translation and meaning... In the rest of his analysis he brings out the nuances of various grammatical structures.

The lexical analysis of ιλαστεριον is well done.  Oleg follows a modified methodology from Gordon Fee’s book.  Along with other lexical works, he makes good use of BAGD and Louw and Nide’s Semantic Domains.  He presents the time period where the word appears regularly.  He shows its use in non-biblical material, then moves on to the LXX and the New Testament.  He ends with a range of meaning that includes 13 distinct uses.  In his analysis of the data he compares the reasoning mostly of Leon Morris, James Dodd and D.A. Carson.  In the end Oleg comes to the conclusion that “propitiation” is the correct translation.  He gives several reasons for this decision.  This is a solid lexical analysis, but what is missing is this.  It could not see his though process that shows how he eliminated the other 12 options.  I think that would have added a lot of richness to the analysis.  Oleg explains the thought process of Morris, Dodd and Carson but not his own.

…Next Oleg gives his personal translation, a theological interaction and some personal application and reflection.  This is well developed and I especially enjoyed his personal reflection.  I think these reflections would be especially effective in the sermon or Bible study.  He shows how solid scholarship can have a profound effect on the spiritual life of a person.  Well done!

Solo Dei Gloria!
Posted by The Mosse' Family at 10:56 PM No comments: