Some thoughts on Ephesians 4:9 (Part III) How Textual Criticism can sometimes help us understand meaning

There are several textual variants in Ephesians 4:7-9.  In verse 8, some manuscripts have “He gave (εδωκεν)” and some have “He also gave (και εδωκεν)”.  In verse nine some manuscripts read “except the one who descended (ει μη οτι και κατεβη)” and some read, “except the one who first descended (ει μη οτι και κατεβη πρωτον)”.  Also in verse nine some manuscripts omit the word “parts (μερη)”.  While none of these variants have a huge impact on the meaning of the text, the second variant gives us some insight into the understanding of some second century scribes.  The second reading is probably not original but it is attested by the Old Latin, Vaticanus (B) and the second hand of Siniaticus (Aleph).  The Old Latin preserves readings as early as the second century and even though Aleph and B are fourth century documents, most agree that their reading reaches back to the second century.  Assuming these facts we can make at least three conclusions.


Assuming that προτον (first) was added, it still tells us that at least to some translators and scribes the order of events was important.  Some wanted to make it very clear in this passage that the ascension that Paul is talking about happened after the descent (first descended).  Whoever added the "first”(προτον) wanted the order of events to be clear rather than implied.  It may have even been intended as a marginal note.  (The variant in Sinaticus is probably meant to be a correction, but looking at the actual manuscript (see below), it could be concluded that a scribe was just adding a marginal note.) 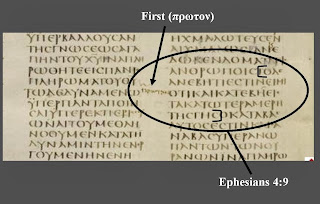 
Why would a scribe or translator add the word “first” to the text?  If someone understood the “descent” as referring to either the incarnation, burial or descent into Hades and the ascent referring to Jesus’ ascension to heaven, then the descent must come before the ascent.  Without the word “first”, the text is ambiguous but seems to point to an order of ascent – descent.  If Paul means that the ascent came before the descent, then this cannot be a reference to the incarnation, burial or descent to Hades of Jesus.  A scribe could easily clear this up by the addition of the word, “first” either in the text itself or in the margin as a note of clarification.  In contrast, it doesn’t seem logical to remove the word if it was original.  By removing the word, “first”, a scribe or translator would make a clear text more ambiguous.  If scribes did edit texts, they tended to do it with the goal of clarifying meaning rather than confusing meaning.


What does this tell us?


·         It tells us that very early there was probably some debate about the meaning of this passage.  Even to the native Greek speakers there was some ambiguity here.


·         It tells us that, at least to some, the order of events was very important.  They wanted it clear that the descent came before the ascent.  They made this clear by either editing the text or adding a marginal note that eventually was included in the text.


·         If Paul means that Jesus first ascended and then descended, then he cannot be talking about Jesus’ incarnation, burial or descent into Hades.  These three events require the descent to take place before the ascent.

Does this solve our problem?  Not really, but it does give us some good information as we go back to our exegetical toolbox.
Posted by The Mosse' Family at 1:37 PM No comments:


The bold type indicates the main rhetorical features.  Even if you don’t know Greek, you can see the repetition of words.  In English it could be rendered something like this:


A  But the one who already ascended, what does this mean except that,
B         he also descended to the lower parts of the earth?
B’        The one who descended is He
A’ who also ascended high above the highest heaven, so that he might fill all things.


In a more simple form the structure can be presented like this.


This rhetorical structure helps us in at least three ways.

That is about as much help as we can find from the structure of Ephesians 4:7-9.  It doesn’t clear much up but it gives us a little more insight and some more to think about.


To make further progress we have to return to our exegetical toolbox.
Posted by The Mosse' Family at 12:48 PM 3 comments: