The Grammar of the Great Commission 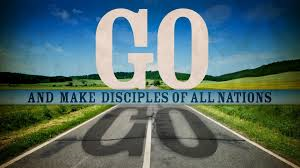 Knowledge of ancient languages is just one tool (an important but not essential tool) in the toolbox of study. I am a firm believer that a person does not need to know Koine Greek in order to understand the New Testament. I am convinced that, with careful study, a person can determine the original intent of the original author to the original audience without knowing the original language. Culture, textual context, theological flow, historical background, purpose, theme, etc. can all serve to inform the student of the Bible. I also think that our English translations are pretty good. But, even better, we also have multiple translations. That means we can compare translations and where there is disagreement among translators, there is probably need for further study of grammar/textual/structure questions. For the person who does not know the language, this is where the commentary becomes very useful. In English we have a rich array of dictionaries, commentaries, surveys, journal articles and computer software to help us determine the nuance meanings of the language.


That said, I do think that knowing New Testament Greek is a great blessing, privilege and responsibility. It can often give insight into a passage that would take much longer to figure out through commentaries, lexicons and Bible software. Further, the drawback of working through secondary resources like these is that you are at the mercy of the author of the commentary. You can only see the language through his or her eyes. This can be a problem because, in my experience, some of those who do know some Greek often focus almost exclusively on lexical meanings. For example, we often hear statements like, “Paul used the word “fill in the blank” and that word really means “fill in the blank”. Sometimes this is significant information, but often it is just filler. One good test of significance is to test the meaning the preacher/commentator gives against the meaning in the translated language. If the meanings are the same, the preacher/commentator has told you nothing. Here is an example from a commentary. I have not cited the commentary on purpose.


The word "better" is pleiona, which means "greater" or "more important" as suggested by its use in Luke 12:23: "Life is more than food, and the body more than clothes."


When I read this, I asked myself, “What does the word better mean in English?” The definition “greater or more important” is not very precise but is more than sufficient. Better does typically mean something like “greater or more important.” So, at most, the author has told me that the word translates well into English. In that case, why explain it? In other words, knowing that the Greek word here is pleiona adds no meaning to the text.


Often lexical meanings are significant because sometimes words do not translate well from one language to another. Or a particular word or phrase may have a cultural meaning tied to the time period of the document. In these cases lexical analysis can be very insightful. However, it has been my limited experience that the grammar more often gives insight into meaning than lexical studies. The Great Commission is a Great example.


The typical translation of Matthew 28:19 is “Go and make disciples”. Even though there are two commands (Go and Make), most sermons I have heard, most commentaries I have read and most missionary literature I have read focus more on the Go command and the Make command is often in the shadows. I am not going to argue that this translation is wrong, I am going to argue that there is a better (Greek word pleiona) translation. My comments will focus on the two English commands “Go” and “Make”. I will deal with the latter first.


There is no substantial disagreement about the meaning of the verb “Make” except to say that the verb used requires the addition of the word “Disciples” in English. The single verb in Greek needs two words in English to express the meaning. That is because in English there is no single verb that clearly approximates the meaning of the Greek verb. However, the verbal phrase “make disciples” does express the meaning well. It is not a common verb in the New Testament (3 uses in Matthew and one in Acts). However it easily understood and well translated. It is also a command. We know this from the grammar. It is in the imperative mood. As the main verb in Matthew 28:18-20, it functions as the primary verb and Jesus’ primary command.


In contrast, there is a debate about the word for “Go”. This verb is a common word in the New Testament (at least 154 uses in the New Testament including 27 uses in Matthew). The meaning is simple. The word means “go” or “depart”. In other words, the English word “go” has a very similar range of mean as the Greek verb. The debate is connected with the grammar. Again, decision about grammar, rather than lexical meaning, will influence translation and interpretation. The word is a participle, yet in most English translations it is translated like an imperative verb. Why is this? It is because a Greek participle can sometimes function as an imperative verb. It is creatively called the “imperatival participle.” So that tells us that the translation “Go and make disciples” is permissible. However, I want to argue that it is not the most accurate expression of what Matthew wrote. Matthew expressed Jesus’ words in a single complex command and I want to argue that we can express the functional equivalent in English by also using a single complex command. I will offer just two arguments for a great commission with just one command.


In his large grammar, Daniel Wallace makes the following comment about the imperatival participle, “The participle may function just like an imperative. This use of the participle is not to be attached to any verb in the context, but is grammatically independent. The imperatival participle is quite rare” A little later Wallace quotes Robertson.“In general it may be said that no participle should be explained in this way that can properly be connected with a finite verb.” Finally, Wallace concludes, “This is an important point and one that more than one commentator has forgotten.” If we accept this as good advice and apply it to Matthew 28:19, we see that the participle (go) can be (and very naturally is) connected to a finite verb (Make disciples). And if the participle can be connected to a finite verb then there is no need for the participle to function as a verb. Matthew 28:19 has an aorist participle and an aorist active imperative main verb. The verb is “Make disciples” – imperative. An aorist participle is usually used with a main verb to show antecedent action. So the idea is something like this: “After you have gone” or “Since you are going anyway” – main verb. So the first reason I think we should translate the Great Commission as just one command is because Matthew used a main verb to which the participle can be connected.


I think the second reason forms an even stronger argument. Matthew was a good writer and I am sure he wanted to convey Jesus’ words as accurately as possible. The assumption is that he would use all the grammatical tools and skills at his disposal to record the words and actions of Jesus. So, the question is this. “If Matthew wanted to clearly write the command “Go”, could he easily do that in Greek?” The answer grammatically is yes. That brings up a second question. Since the Greek language allows the imperative “Go”, did Matthew know the language well enough to use that structure? Again, the answer is yes. We know this because he often did exactly that. Here are just two examples.


When it was time for Joseph to take Mary and Jesus back to Israel from Egypt, Matthew used the imperative of “Go” to express what the angel told them to do - “go back to the land of Israel. (Matthew 2:20)”  The second example is a little more interesting and shows just how flexible Matthew was in the use of this particular word. When Jesus is sending out the 12 in Matthew 10, Matthew uses the imperative “Go to the lost sheep of Israel” in verse 6. Then in verse 7, he uses the present participle (same verb but different tense as he does in 28:19). “As you go” or “while you are going, (command) preach…”. Here we have a near parallel to Matthew 28:19 and it is clear in the second use (verse 7) that the participle is subordinate to the imperative. “Go and while you are going, preach”. More importantly, this example shows that Matthew clearly knows how to use this word as an imperative or participle.


So, here is the question. Why do so many English translations translate the Great Commission as two commands “Go and Make disciples”? Answer: “Attendant Circumstance”, but that is a different blog entry. My main point is this. As seen above, the grammar, not the lexical meaning, shows us that Matthew expressed what Jesus said using one clear command– Make disciples.
Posted by The Mosse' Family at 1:22 PM 4 comments: