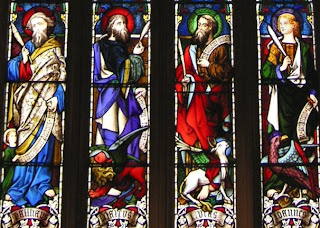 I couldn’t sleep one night so I decided to reread Rethinking the Synoptic Problem (Baker Academic, David Alan Black and David R. Beck, ed.).  At around 3:00am, as I was reading Scott McKnight’s chapter, A Generation Who Knew Not Streeter: The Case for Markan Priority, I had an epiphany.  Well, maybe not an epiphany – just a clear thought at 3:00am and that is plenty reason to celebrate.  I had read Dr. McKnight’s chapter many times.  His arguments are clear and convincing, but there has always been something about his methodology that didn’t sit right with me.  I openly admit that I am not a scholar and that I am partial to the priority of Matthew.  So the fact that Dr. McKnight’s arguments didn’t sit right with me should be no surprise and could even be a case of personal bias.  However, I think there is something more here and I offer my thoughts and musings for what they are worth.

In his chapter, Dr. McKnight makes a strong argument for the use of text-critical procedures to support the priority of Mark.  He says this, “The most telling argument against the Griesbach hypothesis and for the Oxford hypothesis is the accumulated answers to this question: Which reading most likely gave rise to the other readings?  Put differently, given Matthew’s (or Luke’s) rendering of a saying or event, is it likely that Mark is the later rendition of Matthew or Luke (or both), or is it more likely that Mark is the source for the others?  The answers so consistently move in the direction of Markan priority that one is compelled either to adopt the Oxford hypothesis or jettison text-critical procedures in use by all scholars today.” (page 81).

He gives three compelling examples.  It is true that the watershed question in textual criticism is, “Which reading most likely gave rise to the other readings?”  When applied to the synoptic problem, I must admit that my commitment to the priority of Matthew was shaken.  However, as I was reading that morning, I begin to think about assumptions.  I thought about the assumptions connected with textual criticism and the assumptions connected with the synoptic problem.  As I compared the assumptions they seemed farther and farther removed from each other.  For example, text critical procedures are used on text critical problems and at least the following conditions are assumed:


This partial list shows that in textual criticism we assume that many factors are static or linear.  We assume one original phrase gave rise to others.  We assume a single author, historical situation, genre, medium of communication, etc.  Therefore the question, “Which variant is most likely to give rise to the others?” is very appropriate.  However, when I thought about the synoptic problem I saw a very different set of assumptions that were far removed (almost the opposite) of those connected with text critical problems.  For example, when thinking about the synoptic problem…

I read this example a couple of times and did some late night/early morning pondering.  Is it more likely that Matthew simplified Marks complicated grammar or Mark complicated Matthew’s already polished grammar?  On the face of the question the answer is “of course, Matthew corrected Mark.”  But then, maybe I was just tired, after thinking about assumptions, I started to imagine how the scene of Matthew writing his gospel may have developed.  What would I have seen if I was there?  Under the Oxford hypothesis, I imagined the year 85 AD.  The aging apostle Matthew is in his study in Caesarea.  Before him is a copy of Mark’s gospel, perhaps Q or a set of other sayings documents that make up Q, possibly an M document and a partially completed scroll that someday will be the gospel according the Matthew.  In his copy of Mark, he reads the phrase και οντος αυτου εν Βηθανια εν τη οικια Σιμωνος του λεπρου κατακειμενου αυτου ελθεν γυνη εχουσα αλαβαστρον μθρου ναρδου πιστικης πολυτελους... He thinks, “I remember when that happened.  We were all at Simon’s house, Jesus was at the table and then she came in with the bottle of perfume.”  He sees Mark’s attempt to introduce the scene and corrects his grammar to make it more readable.  Matthew writes, του δε Ιησου γενομενου εν Βηθανια εν οικια Σιμωνος του λεπρου προσηλθεν αυτω γυνη εχουσα αλαβαστρον μυρου βαρυτιμου....

Could it have happened that way?  I suppose it could have.  Even though all the church fathers who comment on the order the gospels were written in put Matthew or the “the gospels with genealogies” first, they could be wrong and, based on this linguistic/text critical argument, Mark could have been first.

Then I thought, “What if the church fathers were right?”  What if Matthew was first and Mark was the result of Peter’s sermons in Rome to Roman believers?  I decided to try thinking from the standpoint of the Griesbach hypothesis.  So I begin to imagine how Mark may have been written.  It would be around the year 60 in the city of Rome.  The Gospels of Matthew and Luke would already exist and I can’t imagine that Peter would not know about them.  I am sure that when Matthew wrote his gospel one of the first people he showed must have been Peter.  Anyway, I imagine Peter in Rome teaching the Roman Christians about the life of Jesus.  Maybe he had the gospel of Matthew and/or Luke with him or maybe he taught from memory.  Mark sits close by and is maybe taking some notes.  During one of his sermons Peter comes the scene described in Matthew 26 and he tells the story.  Would he change Matthew’s polished grammar into Mark’s two genitive absolutes?  I don’t know?  It is hard to say.  Matthew was writing a literary document and Peter was giving sermons or maybe just speaking extemporaneously.  It is two different mediums of communication.

As I was imagining this, one of Dr. McKnight’s statements jumped out at me.  He wrote, “Mark’s style is not impossible:  people can have two genitive absolutes together if they want; in a flurry, they might add yet a third.”  That phrase, “…in a flurry, they might add yet a third” kept my attention.  When Peter orally told the same story that Matthew wrote, could he have complicated the grammar?  Of course he could have.  The two genitive absolutes could easily be the result of Peter trying to express in speech, what Matthew may have taken five minutes to express in writing.  (It is also easy to believe that Mark would want to preserve the actual words of Peter as much as he could.)  That would be Peter’s “flurry” that Dr. McKnight talked about.  In the “flurry” of the moment, Peter used some awkward grammar.  I haven’t researched this but two genitive absolutes does sound to me more like something you may hear spoken then something that may intentionally write.  In the written medium, the author has time to think through and polish what he wants to communicate.  In the spoken medium, the author doesn’t have the luxury of the redactor and it is easy to believe that sentence structure could come out more awkward.

These thought were swirling around in my head as I finally made my way to bed.  My conclusion is that the synoptic problem may be much too complicated to make use of text critical methods.  The static and linear assumption that text critical methods rely upon, become dynamic and multifaceted when we move to the synoptic problem.  For example, If Mark 14:3 and Matthew 26:6 were two variants in one book, then the static assumptions of textual criticism would apply and we could examine the external and intern evidence and ask the question, “Which reading is most likely to give rise to the others?”.  However, the answer to this important text critical question, when applied to the synoptic problem, is so complicated that it doesn’t seem to make sense to even ask the question.  I can agree that there is literary dependence, but to answer the question we have to assume we know what form the dependence took.  If Matthew is in his study then of course he “corrected” Mark.  But, if Peter is giving sermons, then of course he could have complicated Matthew’s polished grammar with an extra genitive absolute.  By assuming the form of literary dependence (the situation in history), we almost have to assume our answer before we can ask the question.  So it is no surprise that people who lean toward Markan priority imagine Matthew in his study and those who lean toward Matthean priority picture Peter, in a flurry, using two genitive absolutes.  If this is the case, then the application of the methodology seems to be flawed and we need to look else ware to solve our synoptic problem.

In closing, I am not saying that we should “ jettison text-critical procedures in use by all scholars today”.  I am suggesting that maybe we should use them for textual criticism and not the synoptic problem.