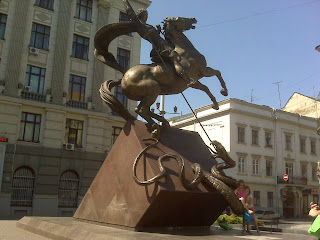 People often ask me what a typical day in Odessa is like. This is a difficult question to answer. It is difficult to answer because I don’t have many typical days. I have ordinary days, boring days, exciting days, sad days and sometimes even restful days. Every now and then I have extraordinary days. I had two of them recently. The second was on a Thursday.
It started as an ordinary day. There was a medical team here from the US. They arrived the Saturday before and because of my schedule I was not able to accompany them. While I was busy in Odessa they were running clinics in small cities and villages in the northern part of the Odessa region. I was getting good reports and on Thursday I had the opportunity to join them. There was a group of three public school teachers and a missionary making the three hour drive to the city of Krosnii Oknii to present a ministry opportunity to the local public school. The medical team was going to be in the same city so the plan was for me to catch a ride with the teachers and meet up with the team. When we met that morning, one of the teachers, Tanya had a headache. She took a couple of advil; we got in the car and were off. The trip started out normal enough. Two of the teachers I met just that morning so the conversation was just “getting to know you” stuff. After about an hour Tanya didn’t feel any better. She asked to stop the car. We stopped and she got sick. The next time we stopped at a pharmacy and purchased some more medicine. Well the medicine didn’t help and Tanya got worse and worse. She developed a fever, her neck began to hurt and she felt weaker and weaker. When we got to Krosnii Oknii we went straight to the hospital. When we took her in she could barely walk. The doctors were very attentive but she kept getting worse. They needed to run some tests so we went and did the presentation. We figured that we would decide how to get her back to Odessa once we know more from the tests.
The presentation went great. But, by the time we returned to the hospital, Tanya had been moved to the infectious disease unit and had lapsed into a coma. The doctors were not sure what was wrong and said that she needs to get back to a hospital in Odessa right away. As we were discussing options, I began to wonder if we were going to have to take her lifeless body back to Odessa. This was an unsettling thought. I have never faced a situation quite like this. Well, we kept exploring options. After several discussions and phone calls we realized that the only way to get her back to Odessa that same day was to hire a private ambulance company. We called the company and they said that they could come and get her but they wanted the money up front. Her husband didn’t have any money so that started a new flurry of phone calls. Thankfully, Julie was in Odessa. She was able to gather the money and get it to Dima, Tanya’s husband. He got the money to the ambulance company and by 3:00am on Friday, Tanya was in Odessa. We hear that she is doing better. She, at least, is not in a coma. We are praying for her and waiting on test results.
This certainly was not a typical day, but I rarely have a typical day. In fact, my point is, “What is a typical day?” Each day I think I know what will happen but I am learning to hold those plans loosely.
Posted by The Mosse' Family at 1:13 PM 1 comment: