Grammatical Musings about the Resurrection 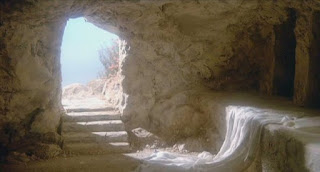 One of the things I like about living in Ukraine is the way the religious culture influences society.  As missionaries, we often speak of the evils of a religious culture.  It is steeped in ritual and not faith.  Some of the practices are a mix of biblical, traditional and pagan influence.  People are deceived into thinking that if they just do the right things, say the right words; they will be accepted into heaven.  These are all true things and we need to keep them in mind in every culture.  However, there are some benefits to living in a religious culture.  One benefit is that most people are theists.  Another benefit is that most respect the Bible.  Another benefit is Easter.  In Ukraine and Russia there is a tradition of congratulating each other on holidays and birthdays.  “I congratulate you on Christmas, your birthday, the first fall of snow, the first day of spring, etc.”  Some holidays, like Easter, have a special congratulation.  On Easter, everyone says, “Christ is risen” and the other answers, “He is risen, indeed!”  In Russian we say, “Христос Воскрес!” – “Christ is Risen” and the answer is, “Воистину Воскрес!”  - “He is Risen Indeed!”   We can say, “Christ is Risen” to any person on the street and they answer, “He is risen indeed!”  Now I understand that many don’t believe what they are saying or it is just a ritualistic practice.  But, as a believer, to hear the resurrection proclaimed everywhere and all day has a renewing effect.


This time of year people also often ask me how to say this in Greek, because if you say in Greek, you get a special blessing (OK, no more sarcasm).  This is a simple question, but I can usually find a way to complicate the answer to a simple question and this is no exception.   In the Greek Orthodox tradition the phrase is, “Χριστος Ανεστη!  (Christos Anestay) And the answer is Αληθως Ανεστη! (Alethos Anestay!)”.  In the original Greek, that means, “Christ is Risen!  He is Risen Indeed!”  The verb in this phrase is in what is called the aorist tense and indicative mood.  Pretty boring concept but bare with me, I have a point.  The typical purpose of an aorist is to describe an action without comment on type of action.  From the context an aorist verb can have different kinds of action but the tense itself is neutral.  The aorist indicative typically shows real action in the past and it is the typical way of describing the past.  So, from the grammar, Χριστος Ανεστη!  Αληθως Ανεστη! simply means that Jesus rose.  In the New Testament, this verb same verb is sometimes used to describe the resurrection and sometimes a different verb is used.  So, it is a legitimate way to say, “Christ is Risen!”


However, the most common verb used after the resurrection, to describe the resurrection is εγειρω.  It has a different semantic domain than ανισταμι, but there is much overlap in meaning.  In other words, they can be used a synonyms.  This second verb is a favorite of Paul’s when writing about the resurrection.  What I find particularly interesting is the way Paul expresses the resurrection to the Corinthian church.  By the way, these thoughts are not unique to me.  I have heard them taught in Greek classes and commentaries, so I take no credit for the observation.  I only take credit for finding it interesting and encouraging.  Paul says to the Corinthian church that this is “of first importance” and then describes the Gospel.  Christ died for our sins according to the Scriptures and was buried and was raised on the third day according to the Scriptures (I Cor. 15:3-6).  The grammar here communicates at least as much as the words.  There are three verbs.  “Christ died.”  This is an aorist indicative verb.  No comment on type of action, just the typical way of expressing past tense.  “He was buried.”  Again, this is an aorist indicative – typical way of showing past time.  Then Paul changes tense.  He writes Χριστος εγηγερται (Chirstos egegertai).  This verb is a perfect indicative.  The perfect is flexible in use, but typically it is used to show a past action with lasting results.  This is especially true when it is used, as is the case here, in contrast to present or aorist verbs.  The idea is something like this:


The first readers of this phrase were probably mostly first listeners as someone read to them, would have understood this powerful nuance implicitly.  The idea that the risen Christ remains risen powerfully jumps out from the grammar.  So, I like Paul’s version the best.  But that still leaves me with a bit of a dilemma.  When people ask, “How do you say that in Greek?”  I cannot give just a simple answer.  So I say something like this.  “Well, there are a number of ways.  The most popular is the traditional Greek Orthodox phrase "Χριστος Ανεστη!  And the answer is Αληθως Ανεστη!".  But those verbs are aorist tense and while being technically correct, there is a much more expressive way to say it.  Paul is much more expressive when he writes, Χριστος Ηγηγερται!  Αληθως Ηγηγερται!”  That is my usual intended or attempted answer, but in reality I have never gotten much past the word “but”.  However, you cannot cut off a blog, so there it is.  Χριστος Ανεστη!  Αληθως Ανεστη! Or Χριστος Ηγηγερται!  Αληθως Ηγηγερται!


Either way, He is Risen! – Remains Risen! And will always be Risen! Amen!
Posted by The Mosse' Family at 6:30 AM No comments: