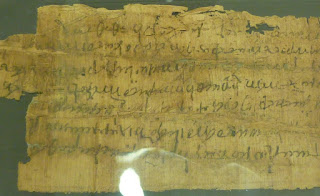 
·         This is obviously a bit subjective but in a passage that emphasizes walking in the Spirit and the abiding presence of the Spirit in the believer as a sign of belonging to Christ, reading one seems to be the more theologically difficult.


·         Prefer the reading that best accords with the authors style and vocabulary.


·         This could be either reading one or three because the exact same phrase is used in 8:4.  Below, this becomes a powerful argument for reading one.


·         Prefer the reading that best fits the context and the author’s theology.


Second preliminary conclusion:  The external evidence points to reading one as original.  The internal evidence seems to me to be a little ambiguous.  Reading one is shorter and more difficult, however, the longer readings could accord with the author’s theology and style.  So at this point I am leaning toward reading one, but I am not entirely convinced.


After considering the above evidence there is one more “watershed” principle that needs to be considered.  In my experience, this is often the principle that convinces me which reading is original.  Prefer the reading that best explains the origin of the other readings.


Reading one seems to best explain the rise of the others.  It is easy for me to imagine why a scribe would add the words “who do not walk according to the flesh but according to the Spirit.”  Without that phrase, it could be understood that Paul is saying that character change is not important with respect to salvation.  Of course that is not what he is saying, but, if someone wanted to make it clear that Paul is not talking about “fire insurance”, I could see how adding this phrase would solve the problem.  I can also see why a scribe would think himself justified in adding the phrase.  The exact same phrase appears in 8:4.  In taking the phrase from the near context of verse 4, the scribe could see himself clarifying the meaning without violating the writing style of the apostle.  Early scribes tended to clarify the text rather than make them more ambiguous.  In the same line of reasoning, if the phrase were part of the original text, it seems hard to imagine why a scribe would remove it.  Removing the phrase makes the meaning of the passage more ambiguous.  If we accept the premise that scribes tended to clarify texts then it would be highly unlikely that a scribe would remove either phrase two or three if they were original.  Therefore, based on the above arguments, I conclude that reading one is original.

Now that I have convinced myself which text is original, I see a more daunting task before me.  If I am to teach this in a Russian or Ukrainian context, how do I teach the text without undermining the authority of the people’s Bible?  I will offer my musings about this question in part III.
Posted by The Mosse' Family at 5:47 AM No comments:

When You Disagree with the People's Translation - Part I

When you are convinced that a passage in a popular translation of the Bible is incorrect and the truth is seriously altered by the decision of the translators, how do you teach/preach that passage without undermining the authority of the people’s Bible?  Romans 8:1 offers a good example.

When dealing with textual variants in the New Testament, one of the first questions I like to ask is this.  “Does the variant reading seriously alter the meaning of the text?”  In many cases the answer is no, so there is no need to do a detailed textual analysis and we accept the judgment of the translation committee.  However, there are some variants that do significantly alter the meaning of the text.  Romans 8:1 is one of those texts.  According to the UBS 4th edition apparatus, Romans chapter 8, verse 1 has three possible readings.


·         The first reading is the text accepted by most English translations.  “Therefore there is now no condemnation for those who are in Christ Jesus (NASB)”.  The sentence ends with the words εν Χριστω Ιησου …in Christ Jesus.”  This is the choice of both the UBS 4th and the NA27 editors.  The UBS 4th edition gives this reading a “B” rating.  That means that there was probably one dissenting voice on the committee.


·         There second reading contains the additional phrase “…μη κατα σαρκα περιπατουσιν …who are not walking according to the flesh.”


·         The third reading contains the additional phrase “...μη κατα σαρκα περιπατουσιν αλλα κατα πνευμα…who are not walking according to the flesh but according to the Spirit.”  This is the majority text reading and the reading found in translations like the King James, Russian Synodal and some Ukrainian translations.

Either of the additional phrases found in readings two and three significantly changes the meaning of the sentence.  If the first reading is the correct reading then it is simple a fact that there is no condemnation for those who are in Christ Jesus.  I realize that the theology of reading one needs to be developed in the context of Paul’s argument in the entire letter.  I understand that this is more than a proverb or pithy statement.  However, that is a question of exegesis and here I am focusing on the textual question.  If either reading two or three is original, Paul is saying that freedom from condemnation is dependent on our spiritual walk and obedience.  In other words, the truth is conditional.  If we are walking according to the Spirit and not the flesh then there is no condemnation for us.  But if we are walking according to the flesh, then there is condemnation waiting for us.  By implication, as we live our lives and struggle to follow Jesus, we enter into and fall out of favor with God and have no assurance of final salvation.  That is what I call a significant difference in mean.  Reading one, there is no condemnation.  Readings two and three, there is condemnation.


Since the variant has a significant impact on the meaning of the text, we must determine, as best we can according to the gifts God has given us, which reading is original.  How do we do that?  This is a debate about methodology, but I recommend and try to practice the “Reasoned Eclecticism” approach.  This approach tries to take in to account a wide spectrum of evidence (for example, the manuscripts we posses, the dates and numbers of those manuscripts, the quality of the manuscripts, the date of the reading, the geographical dispersion of the readings, early translations and versions, patristic quotations, the author’s style and argument, etc.) and analyze it in a reasonable and balanced way.  Below is my attempt at a reasoned eclecticism approach to this reading.

We start with the external evidence.  We look at the manuscripts, their dates, quality, geographical distribution, text type, etc.  Table 1 below shows the manuscripts we posses, categorized by text type. 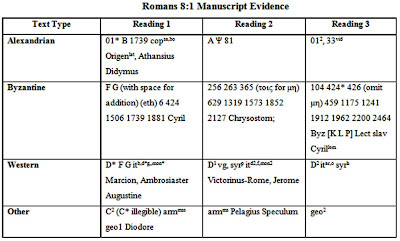 Following the methods of Metzger, Black and others, I will highlight four points with respect to the external evidence.

·         Prefer the reading attested by the oldest manuscripts.


·         Since we have no papyri, the oldest manuscripts are the uncials Aleph and B.  Both date to the fourth century.


·         The second hand of Aleph is represented in the third reading.  That means that sometime after the fourth century copying of the manuscript, a scribe “corrected” the manuscript and added reading three.  So reading three could also be very early.  However, thanks to modern technology and the Codex Sinaitics Project, I was able to see a digital reproduction of the page.  At first I could not find the correction.  The text seemed to be a clear witness to reading 1.  But it seems, it is difficult to read, that the correction is located at the top of the column in a different hand (see photo below).  This could be a correction or simply a scribal note.  This seriously weakens the witness of the second hand of Aleph.

·         Prefer the reading supported in the most widely separated geographical areas.


·         This is no real help.  All three readings are represented by manuscripts that were spread across the Roman Empire.  Therefore, all three readings enjoyed early acceptance in different geographical areas.


·         Prefer the reading supported by the greatest number of text types.


·         Make a distinction between date of reading and date of manuscript and prefer the earliest reading.


·         The earliest reading is represented in Aleph and B, which most agree dates back to the second century.  These two manuscripts support reading one.  However, there are also old Latin witnesses for all three readings.  This means that all three readings were most likely known as early as the second century.  This is good evidence for the early existence of the variant.  However, the Old Latin versions were not professionally copied or checked and therefore do not have the weight of manuscript like Sinaiticus, Vaticanus or Alexandranus.  That said, we do seem to have more Old Latin witnesses for the first reading, thus tipping the scales toward the shorter reading.


Preliminary Conclusion:  Based on the manuscript evidence alone, the agreement of Aleph, B, a number of Byzantine witnesses, Old Latin and early Fathers forms a strong case for the shorter first reading.
Before making a final conclusion about Romans 8:1, we must consider the internal evidence.  These are sometimes called Transcriptional Probabilities and Intrinsic Probabilities.  I will consider four points with respect to internal evidence in part II.
Posted by The Mosse' Family at 10:32 AM 1 comment: