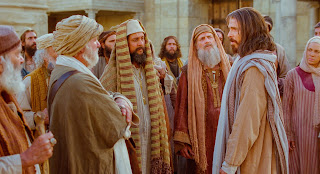 To keep up in politics, I often listen to NPR Politics Podcast.  They have a segment every Thursday at the end of the podcast called, “Can’t let it go.”  It is when they talk about something they just can stop thinking about – politics or otherwise.  This blog is my current, “Can’t let it go”.

A colleague and friend came into my office the other day and asked a question about a New Testament text.  He told me the text and I first looked at it in English – the ISV.  It was John 8:25. The ISV says, Then they asked him, "Who are you?" Jesus told them, "What have I been telling you all along?  My friend asked something like, “What is the connection between this verse and Exodos 3:14?  Someone else had asked him and he didn’t know the answer.  I read the verse again and was confused by the question.  Then I read the Russian Synodal translation.  It reads, Тогда сказали Ему: кто же Ты? Иисус сказал им: от начала Сущий, как и говорю вам.  The last part translates something like, “[I am the One] existing from the beginning, as I have already told you.” or maybe, “…as I am telling you.”  Well, I thought to myself, that is a pretty big difference.  There must be a reason it was translated this way in Russian.  I know that translations can sometimes be wrong, but, I don’t like to criticize them because for the most part they are often very good.  Also, for most people, their translation is the only Bible they have.  If I undermine people’s confidence in their Bible, I am doing damage to the Kingdom rather than helping to build it.  So, how do I disagree with a translation and not undermine confidence?  Good question.  My answer is by trying to understand how the translators came to their conclusions.  That way I can say that even if I disagree, it is still a good translation.

Back to John 8:25…my first thought was that there is probably a textual variant.  I looked at my UBS text and here is what I found, “ελεγον ουν αυτω, Συ τις ει? ειπεν αυτοις ο Ιησους, Την αρχην ο τι και λαλω υμιν? There is a variant.  The relative and indefinite pronouns, ο τι (that, which), in some manuscripts are combined into the conjunction, οτι (that or because).  That is significant, but it doesn’t help me see where the translation “the One existing” – Сущий came from.  So, I told my colleague that there was probably a textual variant that is not listed in the UBS.  I will have to check my NA at home.  That is exactly what I did, but it wasn’t much help at first.

The problem phrase is Jesus answer, “την αρχην ο τι και λαλω υμιν”.  The verb and indirect object are clear – “I am saying to you”.  The problem is the accusative, singular, feminine noun την αρχην, the relative pronoun ο, the indefinite pronoun τι and what to do with the conjunction και.  How do those go together with the main phrase?  We can add to the mix that instead of ο τι, some manuscripts have οτι with is translated either as “that” or “because”.  At this point, as I continued to not let this go, I reached out to several friends in the field for help.  Their input was very instructive.  Thanks especially to Dr. D.A. Black (Brother Dave - http://www.daveblackonline.com).

We can confidently translate λαλω υμιν as “I am telling you” or “I have been saying”.  This is a present tense verb and communicates the idea of continuous action in the present.  “I am telling you now.”  την αρχην can be translated, the beginning, severally, altogether, essentially, first of all, in the beginning.   If we take την αρχην as “the beginning” and ο τι as “that, which” and then και as “also” instead of “and”, then, because “the beginning” implies something that started in the past, we can imply an extra verb “I was telling you”.  Then we can bring it all together as something like, “I am telling you [now], that, which, [I have] also [been telling you from] the beginning.”  The UBS and NA have a question mark at the end of verse 25 and the TR does not.  If we rephrase the translation as a question we have something like, “Am I not telling you now, what I have been telling from the beginning?” or “How is it that I even speak to you at all?” (cf. Westcott, Milligan and Moulton from Biblehub.com).  This second one requires ο τι to be οτι and translated “that”.

A further option would be to supply the verb “I am” in between την αρχην and ο τι.  This is not unreasonable, because John attributed the same phrase to Jesus in the previous verse, “…unless you believe that I AM (εγω ειμι) then you will die in your sins.” (John 8:24).  If we supply την αρχην [εγω ειμι] ο τι και λαλω υμιν, (cf. Metzger, A Textual Commentary on the Greek New Testament, second Edition. p. 191) then we can translate the phrase something like, “I AM the one from the beginning, as I am telling you.” or “…as I have been telling you.”  This seems to be the way the translators of the Synodal understood the verse and it is reasonable.  Metzger also points out that some of the Old Latin, Vulgate, and Gothic translations read “Principium, qui et loquor vobis”, which is very close to the Russian translation.  It is possible that the Latin translation had some influence on the Russian translators. (cf. again Metzger, A Textual Commentary on the Greek New Testament, second Edition. p. 191).

The Russian translation could also find further support from some church fathers.  If again we supply the verb “I am (εγω ειμι), the passage can be rendered something like, I am the beginning, that which I am even saying unto you [now]. (see Augustine, Bede, Lampe, and later by Wordsworth and some older commentators from Biblehub.com).

Therefore, while I don’t agree with the Synodal translation, I can still confidently say, that I understand why the translators made the decisions they did and that they are reasonable decisions.

I personally prefer a translation something like I wrote above, “I am telling you [now], that, which, [I have] also [been telling you from] the beginning.”  This option translates την αρχην as “[from] the beginning”, και as “also”, supplies “now” and the verb “telling you” a second time. There are at least two reasons I lean toward this meaning.  First, it seems too soon for Jesus to repeat the “I AM” statement.  Although, I will admit it is possible.  A frustrated, “I am not changing what I have been saying...” type of answer seems to fit the context better.  Also, according to the NA27, Bodmer Papyrus II P66 adds ειπον υμιν to the clause in a marginal note.  That produces a reading like this, [ειπον υμιν] την αρχην ο τι και λαλω υμιν.  That phrase would clearly translate something like, “I told you in the beginning, that which I am also telling you now.”  (cf. Metzger, A Textual Commentary on the Greek New Testament, second Edition. p. 191).  In other words, the scribe of P66 clarified a difficult sentence and made it unambiguous.  P66 is a late second century/early third century manuscript found in Egypt that probably preserves an early second century (or so) reading.  This scribal “correction” tells me that in the late second century, in Egypt there was some confusion about the meaning of this sentence and at least some understood the sentence as “I told you from the beginning…”.  That is good evidence from Greek speakers who were closer, chronologically, geographically, culturally and linguistically, to the original document and context than we are.

Finally, I want to answer my friends original question.  No, I would not use John 8:25 as a reference to Exodus 3:14.  However, this is not a big deal because I think you can use either John 8:24 or 8:58 from the same dialogue as a connection to Exodus 3:14.  However, there are some nuances to this and a detour needs to be taken through the LXX and Isaiah.  But that is a different post.
Posted by The Mosse' Family at 1:28 PM