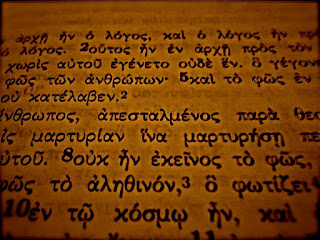 While living here in Indianapolis, I have been going to a Bible study on Hebrews. This week we will be discussing chapter six. In my reading, I was reminded again how decisions about grammar can impact meaning. Hebrews 6:4-6 is a single sentence with seven participles (eight if you count the implied one) that pose some interesting problems that significantly impact the meaning of the sentence. This highly debated New Testament sentence provides a good example of how sometimes, it is the decisions about grammar that impact translation and interpretation the most. My goal here is not to solve these problems, but to illustrate the need to make well thought out decisions in our study of New Testament grammar.


The phase could be translated something like, “It is impossible to renew again to the point of repentance…”. What does εις μετανοιαν/to repentance mean? That is for a different discussion. What is important in this discussion is that we have our primary clause. In the passage it is interesting that five participles separate the “it is impossible” and “to renew again…”, but that is also a discussion for another time. There are five participial phrases that form the direct object of the infinitive ανακαινιζειν. The first participle is clearly a substantive – τους απαξ φωτισθεντας, “those who were once enlightened”. The article and the participle are both masculine, plural, accusative and the next four participles do not have articles. However, I see them as all substantives governed by the same article as the first. Each participle is also masculine, plural, accusative. Each participle is also aorist – matching the first, and each participial phrase is separated by a conjunction (τε or και). The single article governing a list of participles connected by conjunctions forms a tight block of text. Since each of these participles are aorist, they have an antecedent verbal idea. So, the author is saying something like this,

“For, it is impossible to renew again to repentance the one who was once enlightened and tasted the heavenly gift and became a participant in the Holy Spirit and tasted the good word of God and the power of the age to come and fallen away…”.

Wallace suggests that this last participle (παραπεσοντας fallen away) could be a conditional and translated “…if they fall away.” That is possible, but since it is in the sequence of participles in aorist tense, separated by conjunctions, it is also probably also governed by the same article as the others and hence a substantive. In other words, the author uses six attributes (as opposed to five plus one conditional) to describe the person about whom it is impossible to restore to repentance.

One of the key questions is, “Who is the author talking about”. It is difficult to imagine a clearer description of a believer. It is harder still to imagine this list of attributes being used to describe one who only pretends to believe. But, I’ll leave that discussion for others.

Next is the hard part. We have two adverbial present tense participles - ανασταυρουντας εαυτοι τον υιον του θεου και παραδειγματιζοντας. The present tense forms a strong contrast to the previous aorist tense participles and match the present tense of the infinitive. That means that they are connected with the meaning of the main verb. The contrast of tenses was probably not an accident and brings out the imperfective aspect of the participles. The question is, are they temporal or causal. The decision made here has a significant impact on the interpretation.

If we understand them as temporal, we can translate them, “…while they are crucifying the Son of God to themselves and publicly putting him to shame.” The idea is that while they continue this action, they cannot be restored. Implied is the hope that if the offenders change their actions (stop crucifying Him to themselves and putting Him to open shame), then restoration is possible. The temporal option give hope and doesn’t demand the loss of salvation.

In contrast, if we understand them as causal, the picture is much bleaker. As causals they could be translated, “…because they are crucifying the Son of God to themselves and publicly putting Him to open shame.” The implication here is that their state is a done deal and they cannot be restored – there is no hope. It is even stronger if we take the present aorist as a gnomic – “…because they crucify the Son of God to themselves and publicly put Him to shame.” the causal option leaves no hope and demands either the loss of salvation or that the author is describing people who only gave the appearance of being saved.

So, which is correct? or better said, which did the author have in mind? Good question and beyond the scope of this post. I just wanted to highlight the connection between decisions about grammar and interpretation. I will leave the hard decisions to others.
Posted by The Mosse' Family at 1:26 PM